Not much wine in Nicaragua, but the rum sure goes down easy.

Surprisingly easy, in fact, given that it comes from a 130-year-old distillery at the foot of an active volcano.

More on that in a moment...But first, Julien is out this week, so we’re re-running one of his favorites, in which he explains the key differences (and surprising similarities) between Bordeaux and the classic Spanish region of Rioja...

In the 1870s, Alfredo Pellas Canessa arrived in Nicaragua from Italy to run a steamboat on the river San Juan in what was then the main cargo passage from the Atlantic to the Pacific (construction on the Panama Canal did not begin until 1903).

While in Nicaragua, he planted sugar cane at the base of the country’s largest active volcano, San Cristobal. Flor de Caña, the rum he began making there, endures still as one of Nicaragua’s most recognizable brands.

Notice that we say “rum,” not “rhum.” As Brian, the food and beverage director at Nicaragua’s Rancho Santana resort, explained to us, rhum refers to rhum agricole, which is made directly from pressed sugar cane (generally on the French island of Martinique). Expect a heavy terroir flavor and a burning in the back of the throat.

Rum, on the other hand, comes from fermented molasses (itself a product of the aforementioned pressed sugar cane).

At Flor de Caña, the sugar cane grows in a rich soil fertilized by volcanic ash. The refined cane produces molasses, which is fermented, then heated to distill the raw spirit. The spirit is mixed with mineral water from natural underground reservoirs to produce rum, then aged in oak barrels for up to 25 years.

The oak creates the brown color and subtle notes of vanilla we all associate with rum. Cheaper brands dump in added sugar, food coloring and flavorings. Flor de Caña simply lets its rum sit in barrels from France or Kentucky for at least seven years. Although rum is common in fruity, sugary cocktails, the spirit itself is not sweet, as the sugar in the molasses is consumed during fermentation.

Brian led us through tasting the seven-year, the ten-year, the twelve-year, and the eighteen-year. (There is a four-year, clear rum that local ladies enjoy with 7-Up. Brian advised that the former was not meant to be enjoyed neat.) We found the seven-year surprisingly smooth, with a clean mouthfeel and notes of real banana and vanilla (i.e. nothing overly sweet or artificial). 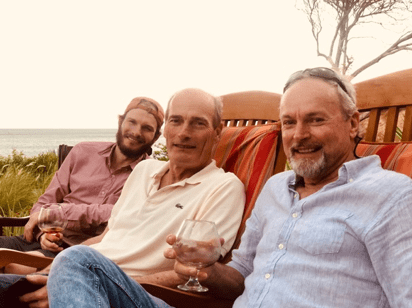 We gladly accepted a few more pours to sample the rest of the lineup, although we must admit our untrained palates struggled to notice subsequent improvements in intensity or flavor.

As night fell and Venus, first to succeed the Sun, emerged on the horizon above the water, the cigars came out. We did not smoke ourselves, content to enjoy the whiff of fermented tobacco as it mixed with the tropical breeze and the aromas of the rum.