Did you know that Argentine malbec is one of the last truly “French” wines?

Most European wines today, even those famous French ones, come from vines grafted onto American rootstocks. The practice dates back to a plague that changed the world of wine forever.

More on that in a moment. But first... Are “older” vines really better?

This week, we revisit Julien Miquel’s lesson on just how much vines change as they age… including the trap first-time winemakers often fall for… the potential payoff of waiting for the vines to grow old… and why many wineries replant before that payoff comes…

Born in the Plague of ‘65 (Continued)

Historians guess that the bug probably entered France, brought over unknowingly on boats from the new world, sometime around 1863.

It would not be discovered until the end of the decade. By that time, French wine, as it had been known for hundreds of years, was mostly extinct. Thousands of acres of vines had died, leaving vintners to puzzle and mourn over yellowed leaves and black, rotting roots.

Phylloxera is a yellowish aphid-like bug that uses a long, thin proboscis to suck sap out of vine roots, not unlike a mosquito on your arm. It is not the feeding that damages the vine, but the chemicals excreted from the bug in the process, which inhibit the vine from healing itself. Multiply that by several thousand microscopic phylloxera on a single rootstock and death is certain.

It takes time for the vine to wilt and die, by which time the bugs are long gone. In the early years of the European plague, scientists could not agree on whether the cause was external (a bug or fungus) or due to some inherited flaw (in 1866, Mendel had created the modern science of genetics by publishing his experiments on inherited traits in plants). 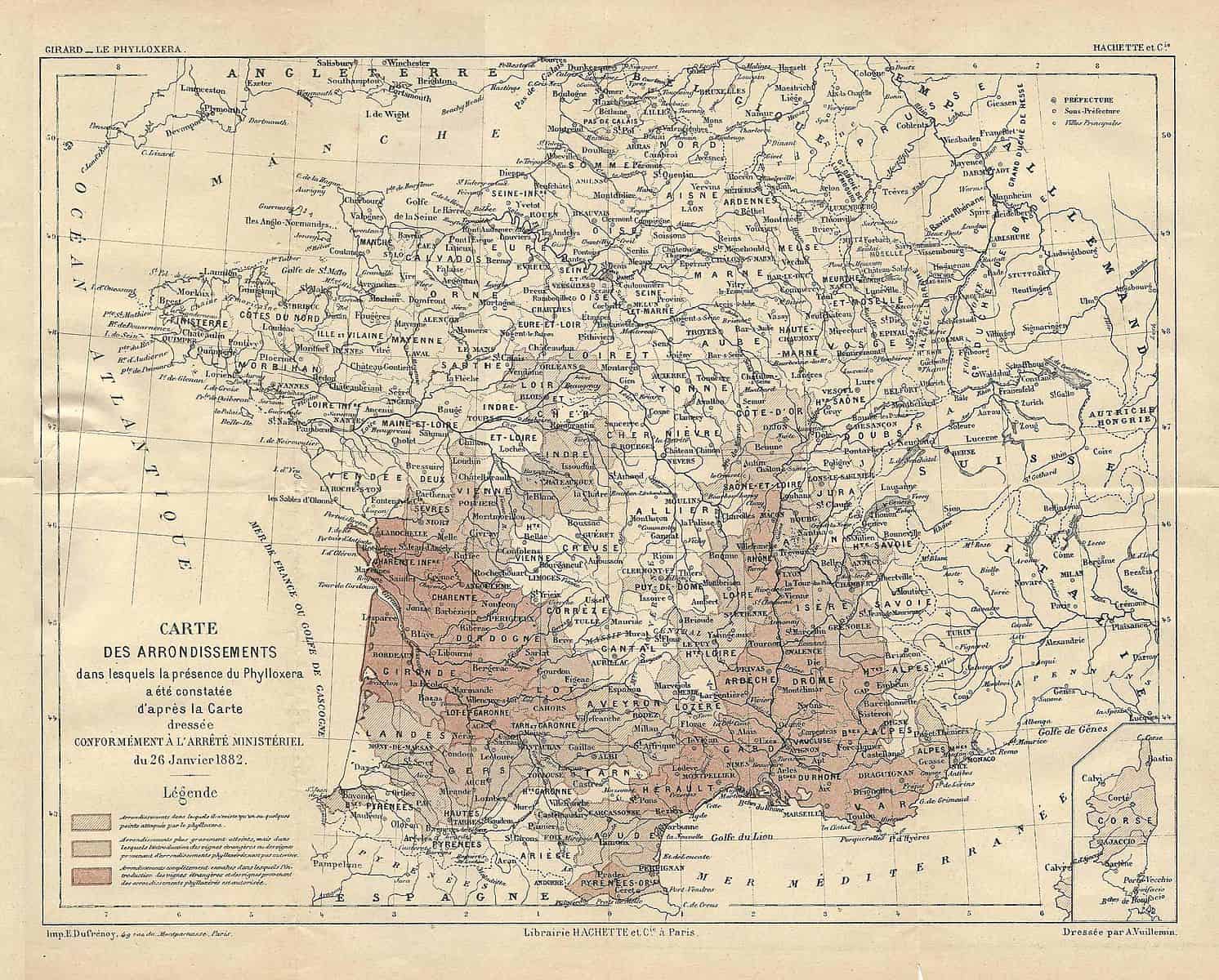 Even when phylloxera finally emerged as the culprit, vintners had no easy cure, which led to a series of desperate efforts including flooding vineyards with water (drowning their vines in the process), and transplanting their vines in plots by the sea (where several vineyards were lost to high tides). An impotent hysteria took hold and entire communities coated their vines in toxic carbon disulfide.

How American Rootstock Saved the Day

Salvation began in secret, a tip passed on strictement entre nous from one vigneron to the next... “le fléau ne touche pas aux Américains.” Rumor had it some French vintners were having success grafting their old French vines onto American rootstocks. The French are proud, but not proud enough to go broke.

To wit, the vines producing today’s vintages are not, genetically speaking, the same kinds of vines that produced famous vintages like the 1846 Bourgogne, 1865 Montrachet, and 1870 Lafite Rothschild (look ‘em up)... the vintages that made France’s reputation.

Those original vines, which include the pre-phylloxera variety of malbec, are known as France’s lost grapes.

Today, they only persist in just a few places on Earth where phylloxera never managed to take hold.

Argentina’s Calchaquí Valley is one of those places.

At the Bonner vineyard at Gualfín, those old pre-phylloxera malbec vines remain still, the last vestige of what was once the pride of France.