Julien is preparing his tasting video for the upcoming extreme-altitude Argentine collection this week.

But you can use this opportunity to catch up on his best videos from 2020... Click here...

Trying to trace malbec back to its early origins in France is more an exercise in etymology than history. They say malbec grapes once grew in Cahors, in southwestern France, just north of Toulouse. Whence the name, vin de Cahors.

They called the grape côt, sometimes côt noir for the wine’s dark color, and sometimes Auxerrois – a strange name, given that Auxerre lies on the northern fringe of Bourgogne, where pinot noir and chardonnay dominate. One struggles to imagine malbec growing there. 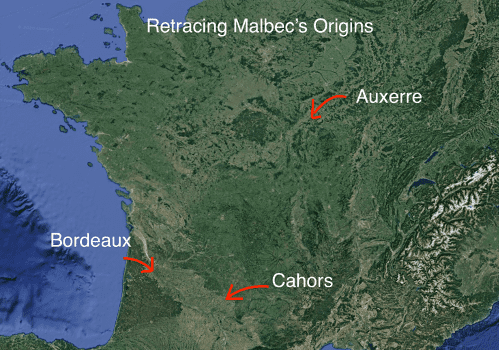 Is it a southwestern grape? A northern grape? Or a Bordeaux grape?

During the Middle Ages, wine from Cahors had a strong brand in the name “black wine.” It was enjoyed by kings, popes, and tsars.

Well, kind of. Some claim malbec as part of the Bordeaux diaspora. But the malbec that grew in Bordeaux before the phylloxera outbreak of the 19th century may have been, in actuality, a relative newcomer to the area.

And that, Dear Reader, is where Monsieur Malbeck enters.

We don’t know who he was. We have only the foggiest idea of when he lived (late 18th century).

But we do know what he did... or what the myths claim he did. It is alleged that sometime in the 1780s, a man by the name of Malbeck planted the first malbec grapes in Bordeaux.

The Bordelais must have taken to calling the grapes after their primo plantatorem, which is how Argentina wound up planted with “malbec” rather than côt or Auxerrois.

Although the Argentine wine industry goes back 500 years, the malbec era only began around 1845, right in time for the arrival of French agronomist Michel Aimé Pouget, charged by Argentine president Domingo Faustino Sarmiento with modernizing the country’s wine production.

Longtime readers will know the story by now. A decade or so later, the phylloxera blight killed off almost every malbec vine in Europe. A frost annihilated the few survivors several decades later.

Malbec vines found in Argentina today are often far older than any found in France. The Argentine vines are also the “un-grafted” variety – that is, they are the original European plants. After phylloxera, the Europeans replanted their vineyards by grafting their vines onto American rootstocks immune to the bug.

In the end, phylloxera worked out rather well for malbec. At elevations up to 10,000 feet higher than Bordeaux, with 80% more UV exposure and 79% less rainfall, the vine thrived along Argentina’s western frontier.

Today, malbec vineyards follow the Andean foothills from Patagonia in the south to Salta and Jujuy in the north. Along the way, the wine shape shifts from a limber mineral wine in Patagonia… to a big, spicy red at the midway point around Uco Valley (southwest Mendoza)… to the hard-edged black pepper and fruit malbecs of the extreme-altitude Calchaquí Valley.

Monsieur Malbeck has come a long way. But finally, at the edge of the world, he feels at home.

P.S. Next week, we’ll share some details on our upcoming Extreme-Altitude Argentine Collection – comprising six new wines from the Calchaquí Valley and Salta. We’re particularly excited for the new offering from Sunal. Well, perhaps “new” isn’t quite right when describing a wine from vines at least 100 years old... but we’ll have more on that next week.