Deep in the Norwegian countryside, under a frozen sky, a grape fights for its life.

It’s cold here. The winters are endless, icy, and grey; the summers short. The grapes often freeze on the vine.

Despite the difficulties, these grapes mark the culmination of a lifelong dream for Joar Sættem. A professional geologist by trade, who admittedly knew nothing about wine or winemaking just a few years ago, Joar is now the founder of the northernmost vineyard in the word - Vingard Lerkekåsa.

But first, should you be buying the award-winning wines? This week, resident expert Julien Miquel gives the insider scoop on wine competitions… like who gets to judge, and how they pick the winners (it’s not just one opinion)… flaws in the system (how many wines do they taste per day?)… why awards aren’t conclusive -- and how they can still help you choose…

The name Lerkekåsa comes from “lerke,” or “lark.” The farm’s location in the southeast of Norway makes it an ideal summer resting home for many European larks. Their arrival each year signals the end of the long cold.

From there, Norwegian farmers can look forward to a decent growing season for hardier fruits (i.e. not grapes). Joar and his wife Wenche first supported themselves by selling wines made from plum, apple, and cherry.

Eventually, his perseverance paid off, with three grapes – a white called “Solaris” and two reds called “Hasansky Sladki” and “Rondo” – all specifically bred to mature quickly and resist cold temperatures. While Solaris dominates in the winery, Rondo is notable for being the product of interbreeding between four wild, non-vinifera varieties of grapes (likely every wine you’ve ever had came from vinifera).

Still, even with these hardiest of grapes, every harvest is a game of chicken. The vines spend the winter buried in snow. When the larks arrive, the grapes have but a few short months to ripen… before the cold, dark nights of winter return.

Vingard Lerkekåsa may seem like a folie. But it was, in fact, Joar’s background in geology that caused him to suspect Lerkekåsa might one day produce excellent wine.

Lerkekåsa sits in what Wenche, Joar’s wife, refers to as a “hot pot.”

Lake Norsjø, in the valley below Lerkekåsa, absorbs sunlight and warm Gulf winds, acting like a huge heat sink and tempering the winter cold. The surrounding hills and mountains reflect that heat, lengthening the summer just that little bit extra to create one of Norway’s “warmest” (we use the term liberally) microclimates, with summer temperatures reaching a sweltering 73°F!

About 30 years ago, Scandinavian farmers noticed their growing seasons lengthening and their winters becoming milder. It’s a trend seen throughout all of Europe. In just 15 years, Denmark, for example, has gone from two commercial vineyards to 90 fully operational wineries.

There’s promise in the industry, but the quality has yet to rise to the level of, say, New Zealand’s famous sauvignon blancs. The vines are young, the practices experimental, and the cold still poses a problem. The resulting wines are often too thin and sharp.

Lerkekåsa, however, is the exception. It is both the world’s northernmost commercial winery, and Norway’s first real success.

Unfortunately, their volume of production is tiny. To taste their wine, you’ll need to get a flight out there (fortunately, Joar and Wenche invite visitors to spend the night in one of their furnished wine barrels). 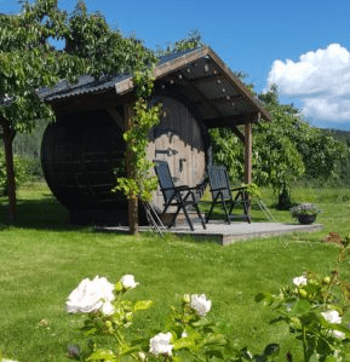 The tiny outpost of Vingard Lerkekåsa is an improbable and hard-won success. But more than that, it points the way to the future. In the next decades, the wine industry will continue pushing northward... into a new frontier.