This week, in honor of the upcoming cellar reopening for our Ancient Wines Collection, we revisit one of our most exciting discoveries in putting that collection together: Alsatian pinot noir.

By the way, you can grab a case of Rendez-Vous 2020 (Alsace, Pinot Noir, Gold Medal Winner at Lyon 2021) – and other wines from the Ancient Collection – at a deep discount for a limited time right here...

But really pinot noir has an artist’s soul – sensitive, mysterious, ebullient one moment then torn the next, and lost without its muse.

The grape is most inspired in Burgundy, in the cool morning mists and bright afternoon sun. For decades, hopeful vintners have carried its cuttings – sometimes legally, sometimes by outright theft – across the globe, like helicopter parents hoping a little fresh air will do their gifted but quiet child a little good. To wit, there are now pinot noir vines growing out by China’s Gobi Desert (some claim it’s quite good, though our experiences with Chinese wine thus far make us skeptical).

More on that in a moment. But first, what we discovered in 2022…

This week, Julien takes us on a journey through the past year at the Partnership… from fresh & powerful high altitude Argentines… to refined Old World beauties…

The Next Great Pinot Noir (Continued)

Amidst many failures, there are some successes in bringing pinot abroad: Chehalem, Oregon (recall our Ruby Vineyard from 2019); Carneros, California (recall our Bouchaine from this year); Yarra Valley, Australia (recall our Helen & Joey from 2020); and (trigger warning) the North Fork of Long Island (don’t knock it till you taste it).

Some people swear by German pinots, too. They call it spätburgunder over there. We had one recently, from a winery the name of which we cannot recall, with a wonderful nose that smelled like a trek through the Black Forest.

The aroma didn’t quite carry through to the mouth, yet there must be something to recommend the German terroir to the pinot vine as it is yielding exciting results just across the border in the French Alsace region (formerly the German Alsace region, and French before that, and German but within the Kingdom of France before that).

Indeed, some within the wine world are going so far as to call Alsatian pinot noir a real “contender” with the Burgundians. Say critics Hugh Johnson and Jancis Robinson:

“what used to be a pretty meagre brew has been transformed by climate change from tart, dark rosé to deep-crimson, even fleshy, well able to take barrel-age and reminiscent of red burgundy.”

Alsace lies just west of the Black Forest on the eastern slopes of the Vosges Mountains. Driving south from Strasbourg towards the region’s southern tip at Mulhouse, you at times wonder if you’ve strayed over the German border by accident. The village names end in “heim” and the houses are built in the half-timbered, or pan de bois, style. 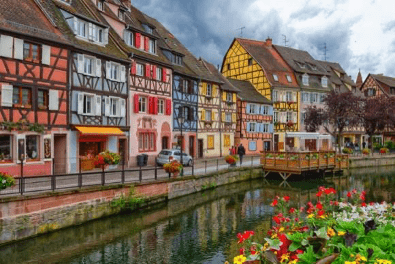 Alsatian homes in the half timbered style

The winemaking also feels like a world apart. Riesling dominates. You find the occasional vineyard planted with distinctly un-gallic names like sylvaner and gewürztraminer. Alsace is also the only French region to put the name of the grape on the label, often before the winery and region. And as for a classification system, well… they’re gonna get around to finalizing one at some point.

Not exactly what you expect of a French winemaking region. But then Alsace is never what you expect. For example, being in the north and squeezed between mountains and forest you would reasonably assume Alsace to be fairly wet. In fact, a rain shadow cast by those same mountains makes Alsace one of the driest regions in all of France (surpassed only by two villages on the Spanish border). Another example: Alsace is divided into two parts, the Haut-Rhin (high Rhine) and the Bas-Rhin (low Rhine). Guess which one is the northern half? Yes, it’s the Bas-Rhin.

The soil is equally confounding. A fault line runs under Alsace which means you can never be sure exactly what kind of mineral – granite, schist, sandstone, limestone, marl, clay, volcanic – you’re going to find under a given plot. Alsatian farmers (and Alsatian vintners do think themselves as being farmers first) claim that the region has the highest number of distinct terroirs in France – 800 at least.

Among Europe’s favored wine grapes, one could argue that pinot noir is the most deeply affected by, and expressive of, terroir. It has an ability to soak up the essence of a place and its soil that few others can. It would make sense, then, that pinot would find much to enjoy about Alsace’s diversity.

But what to do about all that dry weather? The days in Alsace offer little shelter from the sun, a potential problem for a grape with thin skins and a penchant for early ripening. If you’ve ever had cheap pinot noir from the hottest areas of California or Australia, you know that the result is less than inspiring. Put pinot under a broiler and the grape just sort of gives up, losing any depth of flavor. Fortunately, Alsace has a couple aces up its sleeve: forests and cool nights. The nearby pine forests act as a heat sink, cooling down the vineyards in proximity. At night, temperatures drop further, nixing any potential for overheating in the grape.

The best Alsatian wines, pinots included, come from the southern Haut-Rhin. Look for churches built of sandstone, an indicator of what lies in the soil beneath. The winemaking tradition here dates back to the Roman Empire (though there is evidence that Greek wines made it here before then). Local families still grow grapes and make wines in co-ops that date back several generations.

It is on one such co-op that winemaker Guillaume Motzek makes his award-winning pinot noir “Rendez-Vous” (Gold Medal, Lyon 2021). The co-op, shared by four families going back four generations, uses traditional farming methods, including a hand harvest, and sits on a bed of sandstone and marl. Oak is rare in Alsace, but Guillaume opts for 12 months in barrels, an especially smart move for the 2020 vintage, the summer of which was hotter and drier than normal.

Rendez-Vous is a dark garnet wine, with cherries and berries in the nose, and a mouthfeel at first bold then silky. Perfect for sitting outside, perhaps with a blanket, watching the leaves fall.

P.P.S. You can also reserve cases of other great wines from our recent Ancient Wines Collection... also at major savings... including: