Back in 2020, our Mediterranean Collection featured wines with a history going back 3,000 years – long before anyone had the idea of draining the lands around Bordeaux to plant grapes there. (For example, our agiorgitiko was said to have been the favorite wine of King Agamemnon, from Homer’s Iliad.)

We took the opportunity to tell members a little about the origins of wine, in the modern-day country of Georgia, where evidence of winemaking in giant clay amphora called kvevri dates back to the year 6000 BC (when Florida was still underwater).

(As we noted then, the Chinese claim their winemaking tradition dates back to 7000 BC. However, even if true, they were not using the vinis vitifera grape, but a wild, mountain grape.)

This week, we return to Georgia to sample a wine fermented in one of those giant clay amphora – just like they did it in 6000 B.C. (or as close as we’re going to get).

More on that in a moment... But first, a peek at Julien’s notebook. This week, our resident wine expert shows us how to take proper tasting notes… including everything you should mark down (without writing a novel)… why keeping notes is so helpful… plus some useful phone apps if pen & paper isn’t your style...

In Georgia, they say you are either nursing a hangover or on your way to getting one. Hundreds of years of conflict with Russia will do that to you. It doesn’t hurt that the Georgians have been perfecting their preferred libation for several thousand years.

Georgian wine is made now, much as it was then – in a way that would have most Napa winemakers gasping in horror. They stomp on the grapes, then take the whole mushy mess (stalks and all – called chacha) and slop it into a clay kvevri lined with beeswax, and bury it in the ground. (The kvevri is indeed giant at 1,000 US gallons.) 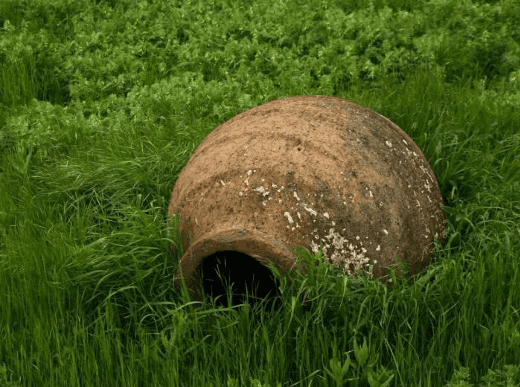 If the winemaker really wants to hew close to tradition, he then lets the chacha sit until the next feast day. Otherwise, he still lets it sit for a good long while before bottling. (Sealed underground with its stems and skins, the wine is said to clarify and settle naturally – though the amount of sediment we found in our bottle of Georgian wine suggests an imperfect natural process.)

The result is an incredibly tanniny wine, probably not too far from what wine was at its birth many thousands of years ago.

Pheasant’s Tears is a winery and restaurant created by a Georgian winemaking family in partnership with an American expat, in Sighnahghi, about 2 hours’ drive from the capital, Tbilisi. Don’t let the Yank’s presence fool you into thinking it’s not a traditional Georgian operation. Pheasant’s Tears uses kvevri from the 19th century and leaves its chacha to macerate for up to 6 months. 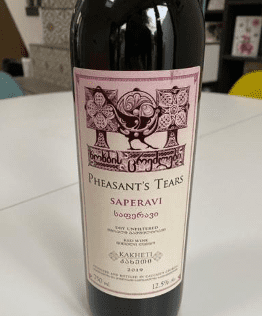 The grape here is saperavi – the original Georgian grape. It’s a teinturier, which means that the grape pulp itself is red with anthocyanin pigments, rather than just the skin (most red grapes are only red on the outside). You could, therefore, get red wine from saperavi without much maceration on the skins. But if you did that, you’d have a wine with a lot less throat-stabbing tannin. And what Georgian wants that?

In the glass, Pheasant’s Tears was at malbec-level darkness, but with a deep purple hue on the edge – a tell-tale sign of youth (2019 vintage).

On the nose, there was, like malbec, plenty of plum. But there was also something else. Definitely not oak, as it was fermented in a clay pot. But wood? Like an old tree growing in a dark, damp forest.

On the palate, the flavor was sweeter than we had expected, with the plum transitioning into prune – not juicy Sunsweet prunes, but dried-on-the-roof-of-a-stone-hut prunes.

We could scarcely focus on the flavor, however, as our attention was fixed on the mouthfeel. Pheasant’s Tears was the most mouth-drying wine we had ever tasted. It wasn’t the tingling sensation you sometimes get with tannin-rich wines, but rather the sensation of having every inch of saliva sucked out of your mouth by a shop vac.

Despite the tannins, Pheasant’s Tears is not a wine for aging. It is meant to be drunk, in copious volumes, with grilled meats, eggplants, and juicy dumplings. Be on the lookout for heaps of sediment.