Survival Tools of the Gaucho

It was late in the afternoon when the gaucho spotted the cow. He steadied his horse and raised his hand, signaling to his cumpas that they should fall back and be quiet.

“Beautiful hide,” he thought. For a moment he fancied that he might keep it for himself. But then he thought of the gold he’d get from the smugglers back in Buenos Aires. That kind of gold could pay for a lot of wine.

He flung the front of poncho back over his right shoulder, revealing a coil of rawhide rope with three round weights attached – his boleadoras.

He swung his boleadoras with one hand, then let go.

The gaucho and his cumpas worked to prepare the cow for skinning with their cuchillos – long, razor sharp knives that every gaucho wore attached to his belt.

Suddenly one of the gang let out a pssscht – halfway between a “psst” and a whistle – signaling the others to look up. On a ridge overlooking the scene, stood a couple horsemen. From their clothes, the gaucho could tell they were Portuguese – likely rawhide smugglers headed north.

The gaucho and his cumpas stood up, wiping their bloodied knives to let the steel sparkle in the sun. A Portuguese never attacked a gaucho with an unsheathed cuchillo. Sure enough, the riders turned away...

More on that in a moment. But first… Should you chill red wine?

In this week’s video, wine expert Julien Miquel discusses proper serving temperature for red wine… including why you’re probably serving it too warm… and a demonstration of how much temperature affects your tasting experience…

Survival Tools of the Gaucho  (Continued)

This week, we talk gaucho tools of the trade.

The American cowboy has his lasso, six gun and Stetson hat. The Argentine gaucho has his boleadoras, cuchillo knife, and wool poncho.

The boleadoras is a projectile weapon in the fashion of the bolas used by indigenous tribes throughout the Americas: a piece of rope with weights attached at the ends. Thrown at an animal, the weighted rope wraps around the legs, tripping the animal and preventing it from rising back up. 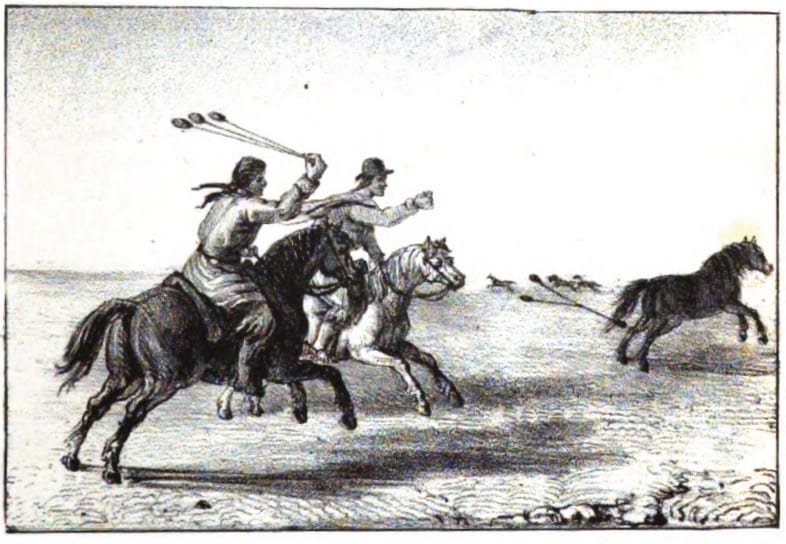 Throwing the boleadoras from horseback

Made of tough rawhide, the boleadoras improves on the original design with heavier rounded weights – stone wrapped in bull scrotum – and the addition of a third weight, lighter than the other two and attached to a slightly lighter and longer piece of rope. The heavier weights take the legs out from under the animal, while the third entangles them – a necessary increase in firepower when hunting the wild cattle and horses that once roamed the Pampa outside Buenos Aires (descendants of a herd left behind by a failed 16th century Spanish settlement). 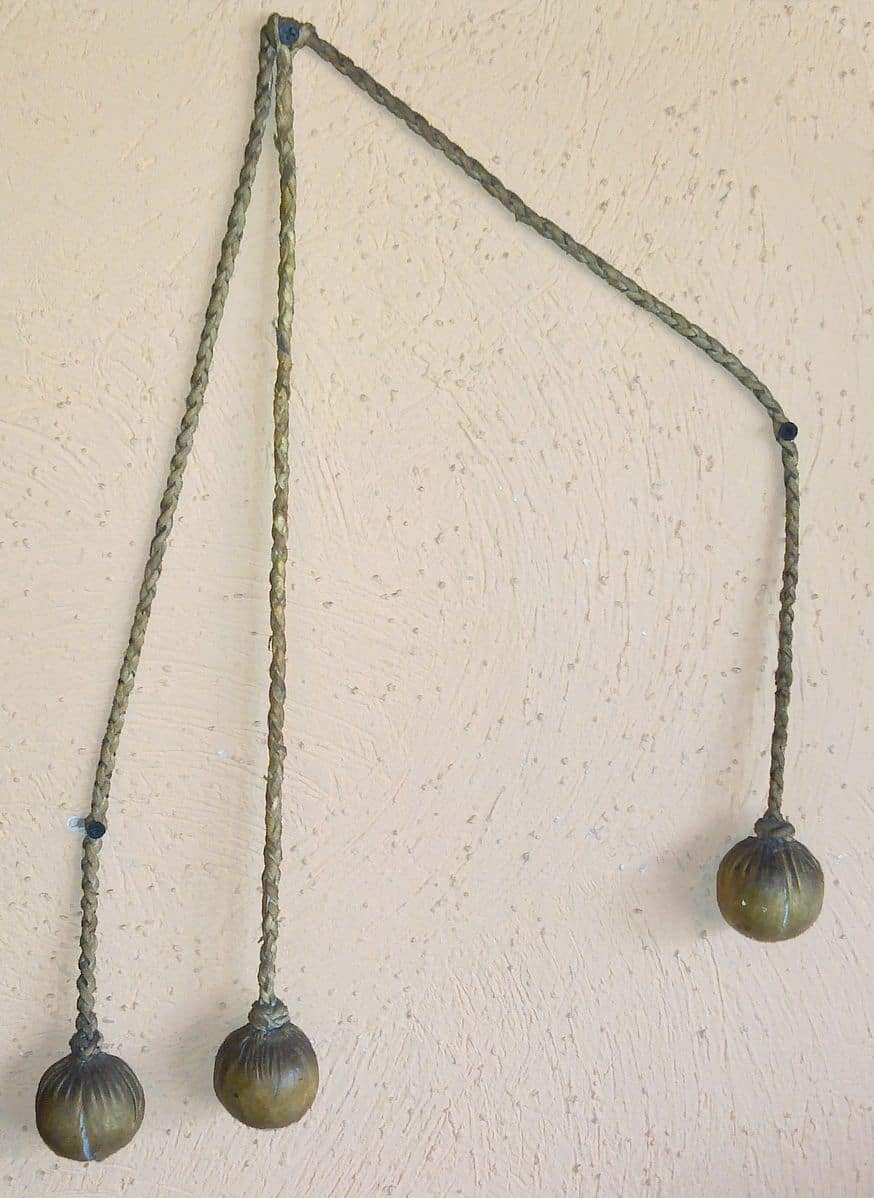 Along with wild cattle, the boleadoras was a fearsome weapon for taking down people (it could also be used as a flail in close combat) as well as the rhea, aka the South American ostrich, a large flightless bird from Argentina’s grasslands hunted for its meat and plumage.

When enormous herds of wild cattle and horses roamed the vast grasslands of the Pampa, the Spanish crown imposed a monopoly on the trade in animal hides from Argentina (then part of the Viceroyalty of the Rio de la Plata). But the Pampa – an area larger than the state of Texas – proved hard to police and a lively smuggling trade sprang up, dominated by two competitors, Portuguese gangs (coming down from what is now Brazil) and Argentine gauchos.

In the early days of the trade, the Portuguese were reportedly surprised when challenged by gauchos wielding, not swords or guns, but what appeared to be large kitchen knives.

In time, they would come to learn a healthy respect for the damage that could be done, especially at close quarters, by a gaucho and his weapon. 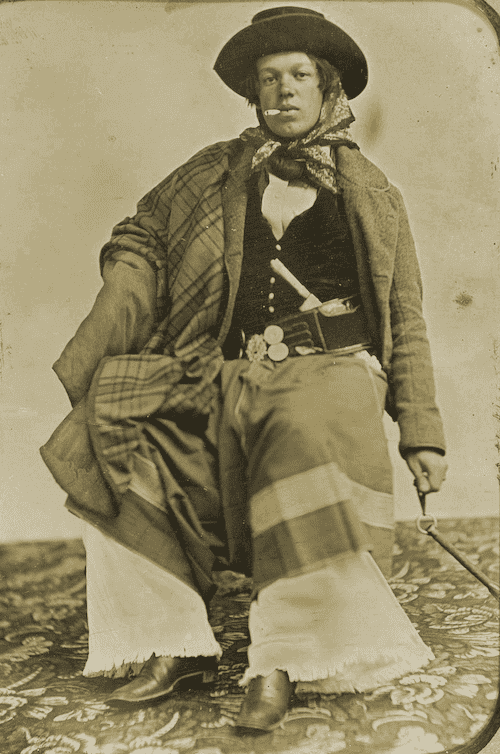 A gaucho with his cuchillo tucked into his belt

There are various names for the gaucho blade, not quite a dagger and too small to be a sword. The most common up in the northwestern desert is cuchillo, but facón, daga, and puñal are also used. The cuchillo was the gaucho’s most versatile tool. It could kill, butcher, and skin. It was also the gaucho’s sole utensil for dining out al fresco on the range (gaucho diets were mostly meat).

19th century Argentine president, Domingo Sarmiento wrote of the gaucho and his cuchillo:

“More than a weapon, the knife is an instrument which serves him in all his tasks; he can't live without his knife; it is like the elephant trunk, his arm, his hand, his finger, his everything.”

While various forms exist, the cuchillo commonly resembles a butcher’s knife with a longer, narrower blade and a bone handle. It is commonly kept in a leather or silver sheath. 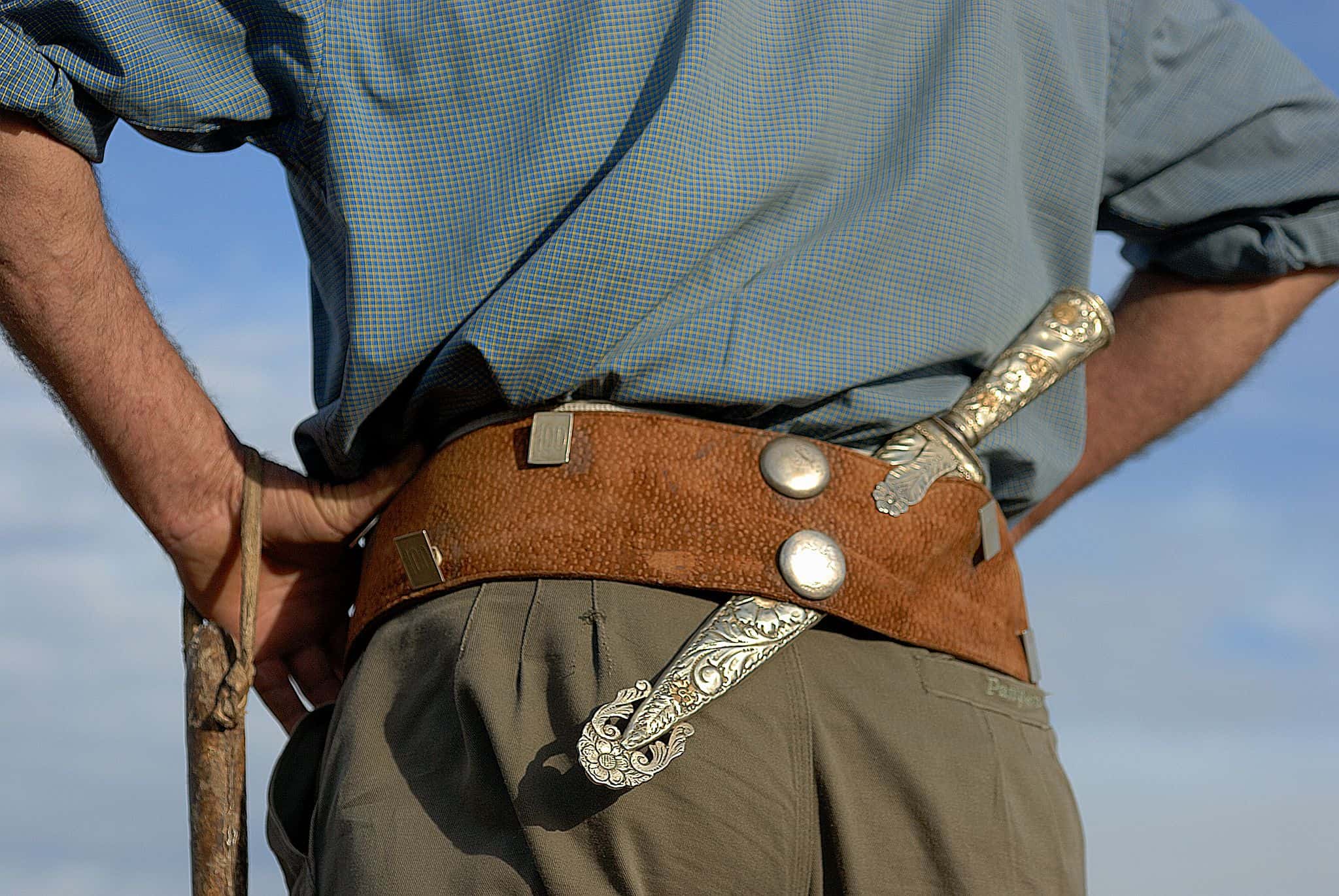 The cuchillo in a silver sheath, tucked into a leather belt

Why didn’t they use guns? In the early days, guns were rare on the vast, lonely Pampa. Large-scale commercial production of guns such as the Remington repeater or the Colt revolver had not yet begun. What rifles existed were expensive and prone to mishap. The gauchos grew to disdain guns – unreliable tools for cowards too afraid to handle a knife.

Despite a huge leather industry, the leather duster, favored by American cowboys in the 19th century, never took off down in Argentina.

For the gaucho, it would have been hard to argue that a heavy coat of stiff leather improved upon a warm, waterproof poncho.

Although it had become widespread by the time the Spanish showed up in South America, the poncho likely originated either in the high desert of Peru or the mountains of Ecuador – climates where covering the body in a tightly woven sheet of alpaca wool could provide a life-saving shield from the volatile elements.

For the gaucho, a poncho might be his most valuable possession besides his horse (and premium ponchos might fetch two or three horses). Out on the range, a lone figure under a vast sky, the poncho was his shield, his coat, and his bed.

We’ve been out with gauchos a time or two up on the high desert plains of the Calchaquí. We brought our sub zero-grade sleeping bags and mats. The gaucho threw down his saddle bags next to the smoldering coals of the open fire, and curled up under his poncho and a saddle blanket. 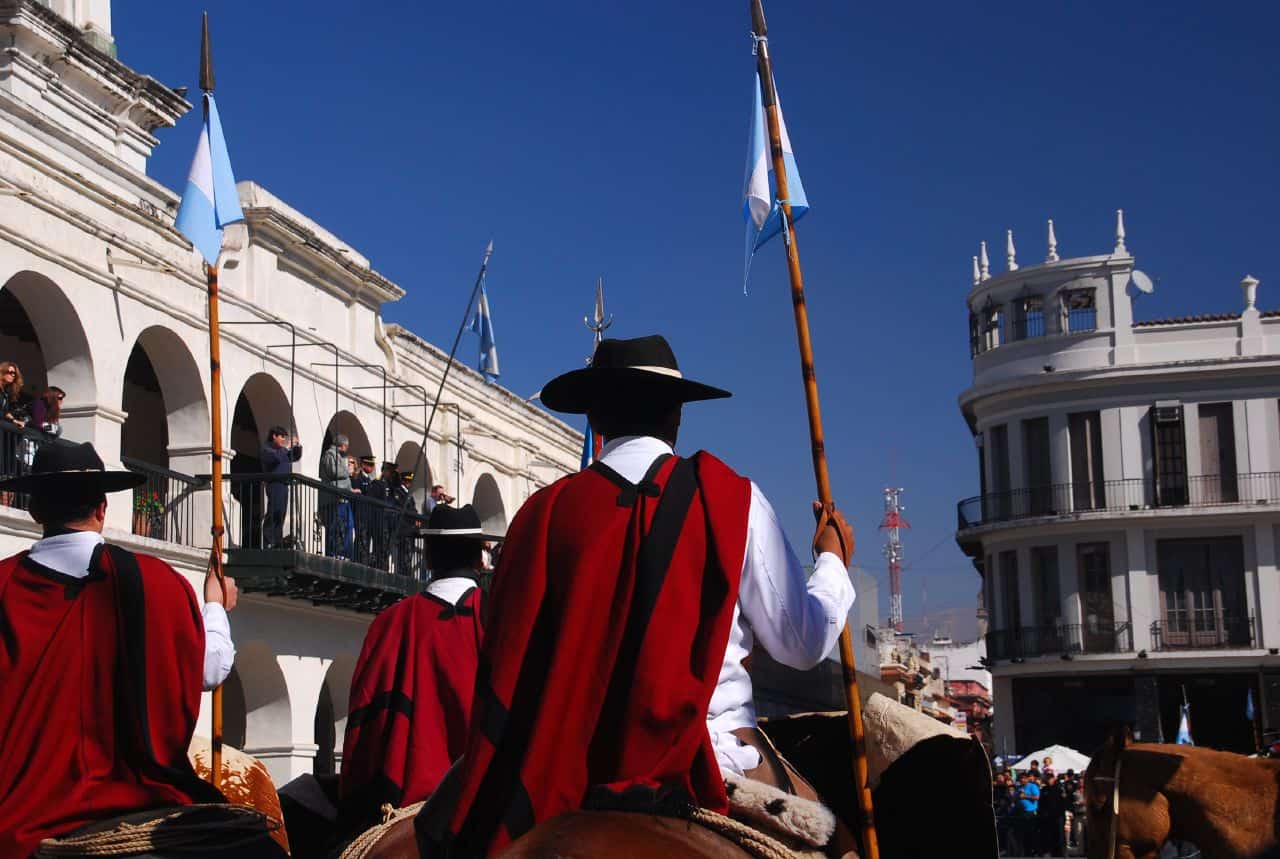 At the turn of the 19th and 20th centuries, railways and fences came to the Pampa. Ranchers brought in domesticated cattle (or fenced in whatever wild herds happened to be on their land). Guns replaced boleadoras and cuchillos.

But in the most remote corners of Argentina – Patagonia, the pre-Andean plateau (like the Calchaquí Valley) – the gaucho still rides.

P.S. If you're interested in a taste of gaucho living, we won't be able to ship a boleadora to your door... but we have a small amount of gaucho wine from our Calchaquí Valley Collection left.

Simply click here to experience the Calchaquí Valley for yourself.