We don’t typically offer rosé at the Partnership. The only time we’ve done so was back in 2019, with the Domaine Ollier-Taillefer from Faugères, in France’s Languedoc region. That was a special find – organic, low alcohol, sun-bleached rather than pink in coloring, and a great example of “garrigue,” the herby aroma found in some coastal Mediterranean wines.

Yet, for the most part, the rosé market is short on value and flavor. Finding that undiscovered rosé, never before available in the US, is a tough put.

Nonetheless, summer is approaching. That means rosé season is once again upon us. For those of you with significant others or friends who do the “rosé all day,” we’ve taken one for the team and tested three French rosés – a legendary Provençale, a surprisingly good celebrity brand for the day-drinking set, and a newer rosé style that will be of interest to our malbec drinkers.

More on those in a moment. But first, the secret to smelling wine like a pro.
In this month’s Q&A video, Julien explains why wine smells different the closer you get… the science behind what you pick up first… and the proper steps to sniffing like an expert…

We started with Château Miraval, a sophisticated take on the rosé-all-day genre (easy drinking rosés marketed to women).

First thing to know is that Miraval’s owners are Angelina Jolie and Brad Pitt.

But Miraval has an extensive history of its own. Located near the village of Correns on the northwest border of the Côtes de Provence appellation, the site has been inhabited since Roman times. In the 1970s, Pink Floyd recorded part of their album, The Wall, at a recording studio set up in the château.

For decades, Miraval produced vin de pays (table wine that did not meet the criteria to carry the Côtes de Provence appellation on the label) before a major renovation in the 1990s raised the quality of its wines, making it one of France’s top wine producers today.

In case you don’t know, Provence is to rosé what Texas is to BBQ. The region begins on France’s Mediterranean coast (around Marseilles) and continues inland to lavender fields and terraced vines. The living is easy. The people are friendly. The cuisine, heavy on seafood, is among the best in France.

The Miraval 2020 rosé we tried had a pleasing, sun-bleached look, likely a result of using the saignée method, wherein you start by pressing the less colorful grape (the grenache, in this case), then “bleed” in (saignée means bleed in French) the darker grape (the cinsault here) to the mix.
Too bad about the “Ahoy matey!” bottle shape. Try fitting this in your fridge to chill. We looked into where the shape comes from – turns out, it was a marketing decision meant to stand out on store shelves. 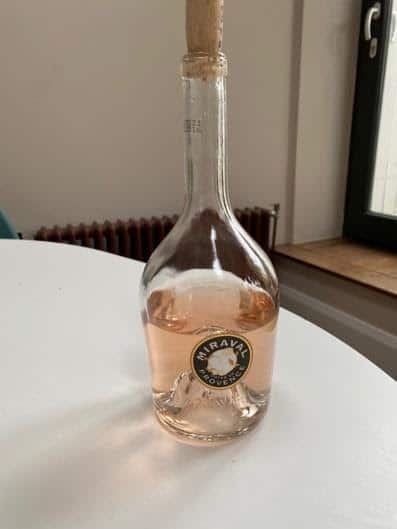 On the nose, we got strawberry, melon, and citrus. Not the deepest nose in the world, but pleasant. On the palate, we got a light acidity, a pinch of sea salt, and herbs (classic for wines with a Mediterranean influence). 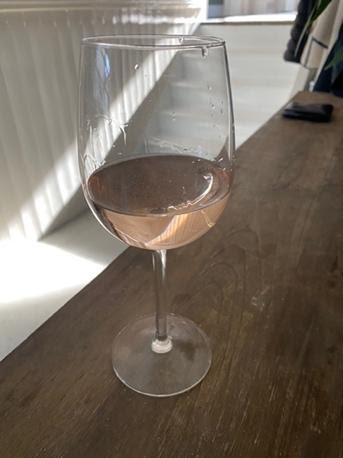 Overall, a good wine, despite the insufferable look of the bottle. It’s drinkable, yet just deep enough to please someone who usually chooses red wine.

The credit goes to the Perrin family, who actually make the wine. Founding patriarch Jacques Perrin was known for his work in Châteauneuf-du-Pape with the mourvèdre grape, specifically the Beaucastel winery, a bottle of which now goes for $500. By contrast, the Miraval 2020 is available on wine.com for just $24.99.