Pot Farms and Pinot on the North Coast

Continuing up the coast from San Francisco past Napa, Sonoma, and Sonoma Coast, you find California’s northernmost wine region, the North Coast.

The Pacific fog gets thick there. At night, it drifts eastward through the Anderson Valley, eventually coming to settle on pinot noir clones and pot plants

More on that in a moment. But first, the weather’s starting to warm up. Are you ready?

This week, Julien teaches us about summer wine… from fresh, floral whites you can drink right out of the fridge... to crisp, thirst-quenching reds (think pinot noir & gamay)... and some rosés you can even drop an icecube in…

Pot Farms and Pinot on the North Coast (continued)

A century ago, we might have called Anderson Valley “Little Alsace.” It was settled in 1849 by Europeans chasing the gold rush. Though most of those Europeans were actually Italians, the small wine bubble that resulted – little known outside the surrounding hills – had more in common with the French borderland of Alsace, where, to quote our high school history professor, “they may speak French, but they wear lederhosen.”

Like its fashion, Alsace’s wine culture is also more German than French. The sparkling wines for which the region is famous are mostly based on riesling, gewürztraminer, and pinot gris.

Anderson Valley is in some ways an ideal climate for colder-weather grapes like those found in Alsace and Germany. While the days are warm, at night, temperatures drop 40 to 50 degrees as a chilling fog drifts inland from the ocean. 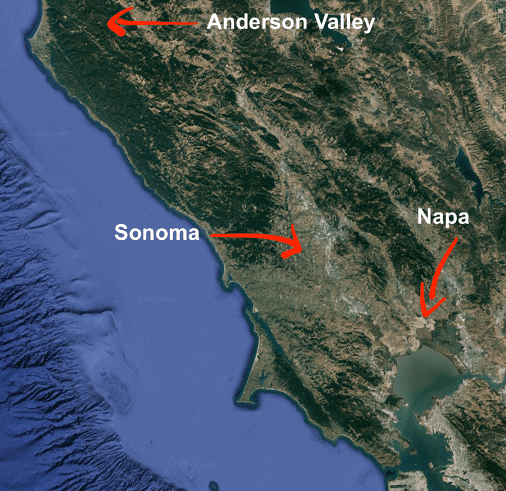 For about a century, Anderson Valley remained an isolated enclave of Alsatian varietals, lost in forests of redwood and oak, unknown to most of the country.

And then the hippies came.

In the 60s and 70s, a wave of flower children from San Francisco came to Anderson Valley to raise sheep, plant orchards, open up “hippie food” stores, and, more generally, reject the conveniences on offer from corporate America.

Pot farms sprang up in the valley, hidden among the redwoods and oak trees. Neighbors traded seeds, cross-bred their plants, and employed “gerries,” older folk for whom Social Security wasn’t cutting it, to bring in the harvests. Over the next several decades, Anderson Valley would form the southern fringe of an area known to law enforcement as the “Emerald Triangle.” Until the recent wave of marijuana legalizations, it was said to be the largest marijuana-growing region in the United States.

There’s a reason they called cannabis “weed.” It grows almost anywhere. Even in poor soil. The same soil that made Anderson Valley ideal for pot farms also makes it ideal for wine – dry sandstone, blueschist, and shale.

The climate was the problem. Bone-chilling, foggy nights, and rainy autumns kept viniculture restricted to the aforementioned Alsatian varietals.

Pinot noir clones were first developed by Germans seeking to reduce the incidence of viral infection in their vineyards. Pinot noir likes to mutate. A lot. Developing clones for cultivation would ensure a more reliable harvest.

California’s UC Davis also experimented extensively with pinot noir clones taken from a plant in the village of Pommard, Burgundy.

But it was not until France introduced the Dijon clone to the US in 1987 that pinot noir came to Anderson Valley. These clones ripen well in Anderson’s climate and are particularly popular on its northern (cooler) side. The secret is in the time it takes the grapes to mature. Pinot harvests in Anderson are three weeks later than elsewhere in California.

The result is cool-weather pinots (the best kind) that make excellent Spring/Summer wines.

In our upcoming “Alta California” Collection – shipping next week – you’ll find one such pinot. It has a profound simplicity – like the farmer who never speaks unless he has something to say.

When he does speak... he does so quietly.

And you shut up and listen.