John Wayne in a Flower Shirt

Syrah is a hard wine. A dry wine. It is perhaps the most similar to malbec of all the European varietals.

Karen MacNeil once said syrah reminded her of “the guy who wears cowboy boots with his tuxedo.” In other words, that most manly of men.

Shiraz, the Australian version of syrah (the varietal is the same; the terroir not at all), is no less a cowboy... though one with a considerably less laconic and more hedonic view of life.

And that, dear reader, is but the outermost layer of the wild and wonderful “opposite world” that is Australian wine...

More on that in a moment... But first, resident wine expert Julien Miquel is here to give us a crash course in Australia’s classic styles of wine… its most unique terroirs (like the blood-red soil of Coonawarra)… and a winemaking tradition hundreds of years old.

Before we began poking around Australia for wine, our perception of the latter was quite poor, mostly due to the big industrial chardonnays (oafish, yellowy syrup) and shirazes (dead as doornails) so often found on American countertops.

Yet, by the time we were finished (and Barry had recovered from some weird illness he contracted while he was down there)... we had had occasion to challenge every notion of what a great wine should be.

Vineyards arrived in Australia in the same way that most westerners did: as part of penal colonies.

Yet, by the 19th century, Australian wines were among the best in the world.

At the 1873 Vienna Exhibition, popularly known as the exhibition that cemented Bordeaux’s reputation, Australian wines trounced Bordeaux wines in a blind taste test. (In a sad twist, the judges immediately walked back their comments after discovering that the wines were Australian.)

The Australian industry received a huge boost when phylloxera decimated European vines. But the safety afforded by distance would not last in an era when global commerce was on the rise. Eventually, the bug would lay waste to Aussie vines as well.

Yet, some parts of the country escaped. It was in one of those small pockets that we discovered the world’s oldest shiraz vineyard (1843).

The vineyard, known as Langmeil, was founded in 1842 and is still a family operation. It brings together new world technology with old world (Italian) sensibility to produce fascinating shiraz and cab blends with hints of blueberry, eucalyptus, and spice. (The eucalyptus, we later learned, is ubiquitous in Aussie wines, as eucalyptus trees are not only native to the country but tend to grow around vineyards as well.)

Paul Lindner is part of the sixth generation to work the vineyard. He employs a breathtakingly meticulous process in his wines, including minimal handling… open fermentation (a traditional and highly finicky technique that is only practical for small batches)… a double pressing that lasts over 20 hours (extracting every last bit of essence the grape skins hold)… no fining… and 12 to 24 months aging. 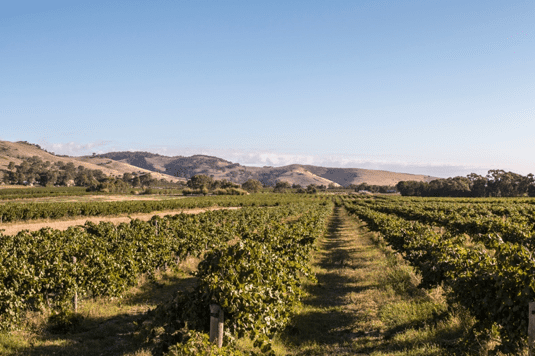 Once, a long, long time ago, we found ourselves chatting with a professor of theory at Juilliard (New York’s pre-eminent conservatory), who, drawing close and lowering his voice, muttered: “See all these classical snobs? Half of these guys got rich playing on disco records.”

Similarly, Australia’s technical mastery has been used to churn out a lot of lifeless, plodding junk for the handful of commercial wine companies that dominate the region. Their product might as well be soda (boxed wine and screwtops originated here in the 1960s).

At wineries like Langmeil, on the other hand, the technical combines with a true sensibility for the rusty, ironstone Australian soil to create wines you simply cannot find anywhere else…

...like the cool pinot noir we stumbled upon at the foot of the Warramate Range in the Yarra Valley. 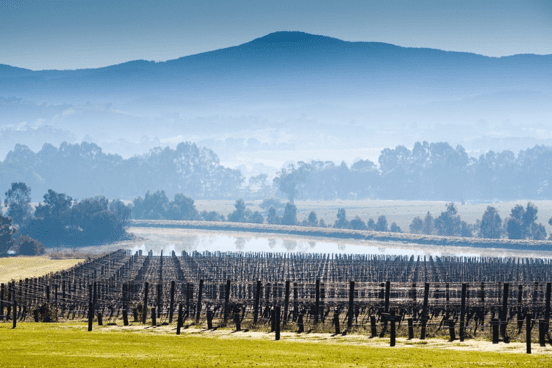 Yarra is wet and cool, the polar opposite of everything we usually search for in a wine region.
Yet, owners Helen and Joey, along with a small team of locals, lean into the environment, going so far as to soak their grapes in cold water for four days before the winemaking process begins. Most of the process takes place in the vineyard, not the winery, resulting in less than 700 cases of ‘low intervention’ wine (music to our ears) that James Suckling recently gave 92 points.

Both wines are hard to find in the US (the Langmeil we acquired is not available here at all), which is common for smaller Australian vineyards. They save their product for locals, exporting just 12% of production.

From the rusty earth of Langmeil... and the cool, wet foothills of Helen & Joey’s estate... we set out for stranger terroirs (and more idiosyncratic winemakers) still...

But we’ll leave it here for today... More on that next week!