Is “extreme altitude” the same as “high altitude”?

We’ve got some exciting news coming from Argentina’s Calchaquí Valley. All will be revealed in a couple weeks.

In preparation, this week we circle back to an oft-asked question: Is “extreme” altitude the same as “high” altitude in wine?

As longtime readers will know, 85% of Argentine wines in the US are from Mendoza. Many of them call themselves “high altitude.” Other “high altitude” regions include Chile, eastern Europe, a few Mediterranean islands, and, purportedly, Colorado (the only “high elevation” operation we found on our trip last year was a “high altitude winery,” the point of which we struggled to comprehend, as the winery’s wine actually comes from Californian grapes grown at 3,000 ft).

As you may have deduced from the above list, what exactly constitutes “high altitude” varies wildly. Most of what’s called “high altitude” is only high relative to the surrounding region. While the relative altitude can matter a whole lot – especially in places like the Mediterranean – there is a world of difference between 2,000 ft (considered high in Europe) versus 7,200 ft (a typical “extreme” altitude vineyard in the Calchaquí).

While “high” altitude can mean any number of things, “extreme altitude,” at least in the Calchaquí, generally refers to vineyards above 6,000 ft. For reference, Napa Valley tops out at 2,600 ft. And the world’s tallest building, the Burj Khalifa in Dubai, towers at 2,717 ft... The highest vineyards in the Calchaquí Valley exceed 9,000 ft. 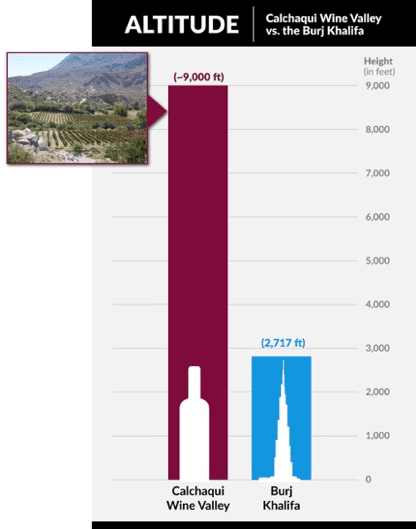 To reach the Calchaquí Valley, the trip first involves a flight to Buenos Aires (usually through Miami), followed by another 3-hour flight to the lush, valley city of Salta in northern Argentina. Sitting in a verdant bowl surrounded by misty mountain jungles, Salta is an old mining town, a refuge from the vast desert plateaus and mountains just a few hours away.

There, troubadours sing old cowboy songs on the central square, as shoe-shine boys offer their services to the men sipping espresso in the local cafes – ranchers, small-town lawyers, rich Americans, former European aristocrats on the run from family and obligations (and, perhaps, the law).

From there, you hop in a Toyota Hilux – truly indestructible – for one of two journeys: over La Cuesta or around through Cafayate. The La Cuesta route involves a winding crawl up a steep mountainside, sometimes through clouds so thick, you can barely see a few feet in front of you. The road is single lane – be sure to honk before blindly going around a corner.

Yet, despite its difficulty (our truck once overheated on the climb up the mountain), La Cuesta offers a truly spectacular experience… as you finally arrive above the clouds to find a vast desert plateau flowing out to the west. 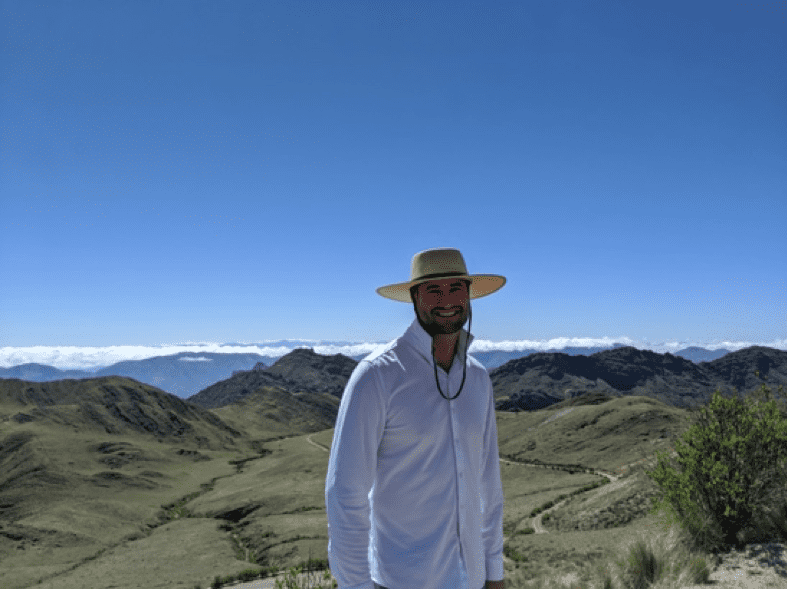 Standing above the clouds

The Cafayate route takes you on a loop around La Cuesta, through the wine and golf (or polo, if you’re a true traditionalist) town of Cafayate. Those of you familiar with economist and gold speculator Doug Casey may recognize the name as the location of Doug’s Estancia de Cafayate, a little community of American ranchers, bankers, and adventurers living on a vineyard and a golf course designed by none other than Bob Cupp (one of his last before he passed away in 2016).

Either way, the journey has just begun. The ensuing trek across dirt roads, dried-up river beds, and incredible desert landscapes will take up to six hours, assuming the roads are passable. On the rare occasion that it rains, flash floods roar through the Calchaquí Valley. Pro-tip: don’t try and forge these instant rivers at night. In our more reckless years, we did so… and nearly died. 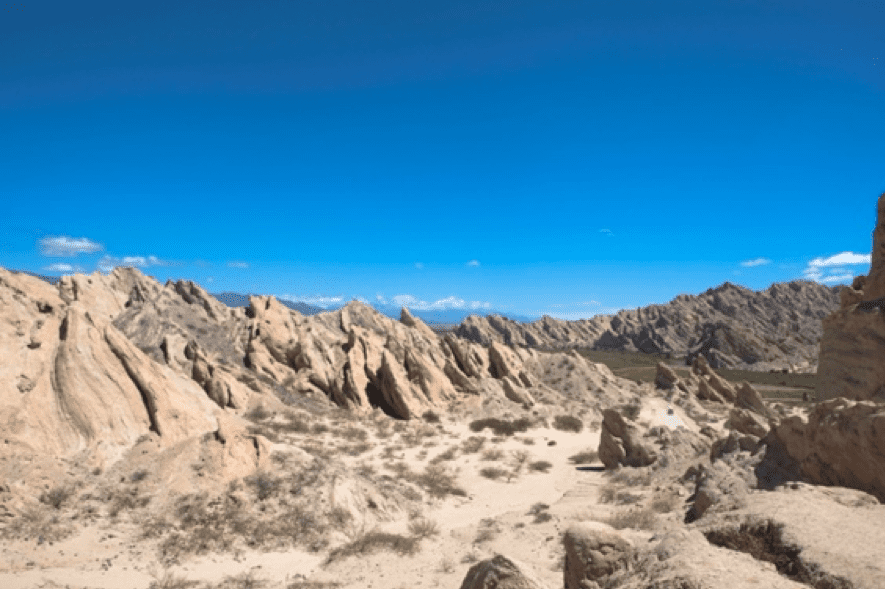 The first winery you’ll hit is situated near a landing strip, where Swiss magnate Donald Hess sometimes flies in to visit his Colomé winery. Colomé’s highest wine, formerly the highest in the world (more on that later), is called Altura Maxima, with grapes from a vineyard at 9,842 ft.

Hess transformed Colomé into a well-appointed (and very expensive) hotel and restaurant. He even built a modern art museum containing the works of LA artist James Turrell.

Yet, in Colomé’s history, Hess is only a recent arrival. Founded in 1831 by the Isasmendi family, Colomé is the oldest continuously running winery in Argentina. Although they sold Colomé to Hess, the Isasmendi retained their vineyards and winery further up the valley, where their descendants, the Dávalos family, still make wine today.

In between there and Colomé lies the ranch of Gualfin, where the Bonner family – including yours truly – has its extreme-altitude vineyard of Pucarilla (8,420 ft.). Gualfin translates to “the end of the road” in an old Indian language. And it feels like it. Once you’ve arrived on the property, you still have an hour to go before you even get to the grapes, way out in their little valley.

We have no bodega (Spanish for winery) onsite at Gualfin. We put the grapes on a trailor and haul them down the road to the even more distant valley of Tacuil, where the aforementioned Raúl Dávalos – descendant of the Calchaquí’s first winemakers – makes them into our wine, Tacana.

Even to those who have known him for many years, Raúl can be a bit of an enigma – the winemaker as reclusive artist. He eschews most publicity and chooses his customers carefully. Living your whole life so far removed from the world – telephone lines only arrived in the last couple years and Tacuil, like Gualfin, must generate its own power – breeds a certain reservation when dealing with outsiders, even those you’ve known for many years. Trying to do business on the Argentine market – kind of like a Spy vs Spy cartoon, but with more hyperinflation – doesn’t help either.

Still, Raúl’s carefulness hasn’t stopped a small circle of critics and connoisseurs from discovering his work. Robert Parker regularly gives his wines 90+ ratings. Tim Atkins, too. After Raúl agreed to make our wine, we were nervous it might not measure up to his standards. We were much relieved when, upon tasting our first vintage, Raúl nodded approvingly, pronouncing it “almost as good as my own.”

We realize at this point that we’ve strayed from our original goal of exploring the difference between “high” and “extreme” altitude wines. So next week, after concluding our journey to the Calchaquí Valley with the vineyard of Luracatao (for all you Sunal Ilógico fans), we’ll revisit the special things that happen when you grow grapes up at 9,000 feet above the world.