How to Drink (and enjoy) White Wine

Just in time to notice that our air conditioner is broken.

Things got desperate when we realized that our personal reserve of Mahi from New Zealand was long gone.

A quick investigation of the cellar yielded a bottle of St-Joseph (Northern Rhône – not a wine you open just for the sake of refreshment) and l’horreur!... a Californian chardonnay.

We popped the chard in the fridge for about 10 minutes (most people chill whites in the freezer for far too long), then popped the cork.

“What are you doing?” C. asked, as I began pouring the bottle into a decanter.

“A little trick,” we replied. “By the time we’re done, this is going to be a completely different wine.”

More on that later. But first, 3 simple tips to a perfect wine-and-food pairing. This week, resident expert Julien Miquel shows us how the pros do it… including identifying “dominant flavors” (is your dish salty, acidic, or fatty?)… the acid rule of thumb… and the Italian trick to creating a perfect food-and-wine pairing (even if you don’t have the right wine!)

How to Drink (and enjoy) White Wine (continued)

At the outset, we didn’t pay much mind to white wine here at the Partnership, mostly because of a burning contempt for buttery Californian chardonnay.

Yet, over the course of our journeys, it became clear to us that a great wine is a great wine.

Longtime readers will remember the apple-tinted godello from Valdeorras or, more recently, the Mahi sauv blanc from the Wairau Valley. In Argentina, we have great hopes for a torrontés, though the shutdown has placed our plans to produce one on hold.

(And even chardonnay has its gems... if you know where to look... More on that in a future message.)

However, the larger presence of whites in the Partnership of late necessitates a brief discussion of how to actually enjoy them... beyond smaller glasses (not necessary) and the occasional ice cube (do what you gotta do).

First, most white wines come from white grapes. A few come from red grapes. The latter are known as blanc de noirs (for example: a white wine from pinot noir grapes).

(You may have heard of a blanc de blanc, which is a type of Champagne made with only chardonnay grapes.)

Second, despite the lack of dark grape skins, white wines DO have tannins. They are ultra-subtle and you will most likely not notice them, except in orange wine (the coloring comes from extended skin contact).

Third, besides grape and terroir, the big distinction in the world of whites begins at those that have undergone malo (aka malolactic fermentation) and those that have not.

Malolactic fermentation is a misnomer; the process produces no alcohol. Rather, it converts malic acid (tart) to lactic acid (smooth). Most, if not all, red wines undergo malo. Among whites, malo is only common in chardonnays and viogniers (though savvy chard makers have begun cutting fermentation short to compete with the rise of tart varietals such as grüner veltliner and vinho verde).

The common charge one hears against white wines is that they lack the complexity of reds. Our guess is that most of the people leveling that charge buy bottles far too cheap and drink them far too cold.

One of the main selling points of white wines is their value. But given the economics of selling wine in the US, you should be suspicious of any bottle under $10.

Shell out for a good bottle, and avoid flattening the nose by serving it ice cold.

Oh, and go ahead with the regular wine glass.

But before you pour that glass, you need a good wine. Chardonnay is the “darkest” white grape, ranging from buttery Californians to lean, acidic Chablis (Burgundy). Try an older bottle like a 2013. You might find something you like.

At the other end of the spectrum, you find vinho verde and, even further out, melon, a grape virtually only found in the French region of Muscadet. Common flavors include bread dough and green apple.

Smack dab in the middle is sauvignon blanc – the goldilocks of whites, with notes of honeydew, grapefruit and peach. Sauv blanc is that rare wine that works as a refreshment while offering enough complexity to keep us panning for treasure in the glass.

Unlike chardonnay, you should drink your sauv blanc young – don’t go further back than a 2015. While the grape originated in Bordeaux and the Loire, the best sauv blancs in the world today come from New Zealand. Those of you who’ve had our 2017 Mahi know precisely what that means. 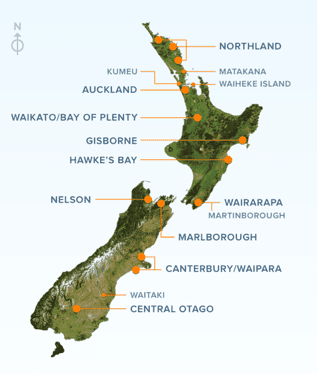 In New Zealand, no vineyard is more than 80 miles from the sea. Vines sitting under a snowcapped mountain (as they do in Mahi’s Wairau Valley) can still benefit from a heavy marine influence.

Resident wine expert, Julien Miquel (who spent several years making wine in New Zealand), loved the intensity of Mahi’s aromas (“so much passionfruit jumping out of the glass, it’s incredible...”), as well as its mouthfeel (“crisp, refreshing”).

Refreshing enough for the casual summer drinker… and deep enough to transport you.

[Note: Bottles of Mahi are still available, but running out quickly. Click here to see our inventory.]

Finally, the most controversial part of this week’s essay: decanting. While the idea of decanting a white may seem silly to you, there’s a historical basis for it. Up until recently, champagne was always decanted. Even today, plenty of sommeliers follow the practice as it reduces the impact of the bubbles and allows for a more rewarding tasting experience.

In the former, a 15- to 30-minute decanting can completely change the character of the wine. Approach with caution. Perhaps decant only half the bottle and compare.

In the latter, the effects will be subtler. We are not trying to change the wine but open it up.

Screw-top bottles, unlike those with corks, have no oxygen seepage. The wine stays almost too pristine, resulting, at times, in a rather closed-off nose. Decanting, by increasing contact with oxygen, will open up that nose.

But don’t take it from us. Run your own experiments. And be sure to let us know what you find.

P.S. Our supply of the Mahi 2017 Sauv Blanc is going fast. Today, you can still snap up a case or half-case at up to 20% OFF (plus free shipping). Click here.

In addition, we also have a few cases from our Australian collection left. Same deal applies (up to $82 OFF and free shipping)... Click here to see the full inventory...