Heir to A Calchaquí Wine Dynasty

Looking out at the Calchaquí’s purple desert mountains covered in cacti, you might miss a little patch of green at the bottom of a canyon - the Quebrada de San Lucas.

There, by a small creek, under the shade of fig and walnut trees, bife roasts over red hot coals. The smoke wafts over to a small plot of malbec vines, where a tall figure dressed in a burgundy red wool poncho inspects the budding grapes.

This is Matìas Etchart, heir to one of the great wine families of the Calchaquí.

More on that in a moment... But first, how to read a wine label.

This week, resident expert Julien Miquel explains how the wine appellation system works… from the French AOC to the rest of the world… why it’s actually not as complicated as it initially seems… and how to use it to find the best wines from any region (and at any store)…

The Etchart family has been making wine around Cafayate, the small town at the center of the Calchaquí Valley’s wine trade, since 1850. The 52 medal-winning wine brand “Bodegas Etchart” came about in the 1980s, when Arnaldo B. Etchart hired the French oenologist Michel Rolland to modernize his vineyard at La Florida.

Long time readers will recognize Michel Rolland as the Frenchman almost single-handedly responsible for the rebirth of the Argentine wine industry at Mendoza in the 1980s. Etchart was one of Rolland’s first consulting jobs outside France. After the Etchart family sold their La Florida winery in 1996, he and Arnaldo went on to create the Yacochuya brand in Cafayate (93 points, Wine Advocate, 2010).

(Despite the sale, the Etchart brand remains a major presence in Cafayate. The flagship, Arnaldo B., has won 52 medals including Gold at the Mondial de Bruxelles.)

In 2010, Arnaldo’s grandson, Matìas Etchart, bought a small farm far outside of town, a place called Arca Yaco. There, fig and walnut trees grow alongside cabernet sauvignon and malbec vines on the banks of a small creek.

Last year we sampled Arca Yaco’s 2018 Amar y Vivir (named for the bolero by Mexican singer Consuelo Velázquez, composer of “Bésame Mucho”). We loved the wet earth nose, and the tobacco and pepper palate (cab sauv becomes super peppery when it grows in the Calchaquí).

This year, however, we wanted to see what Matìas does with a pure malbec.

We were not disappointed.

Imaginate 2019 is an unoaked, concrete malbec (yes, concrete is a theme in this year’s collection).

Says Julien Miquel, “I really love how vibrant and pure the fruit expression comes through to the nose… an absolute delight of a fruit bomb... rarely do you taste a wine with such precise expression… this is a wine to enjoy now.” 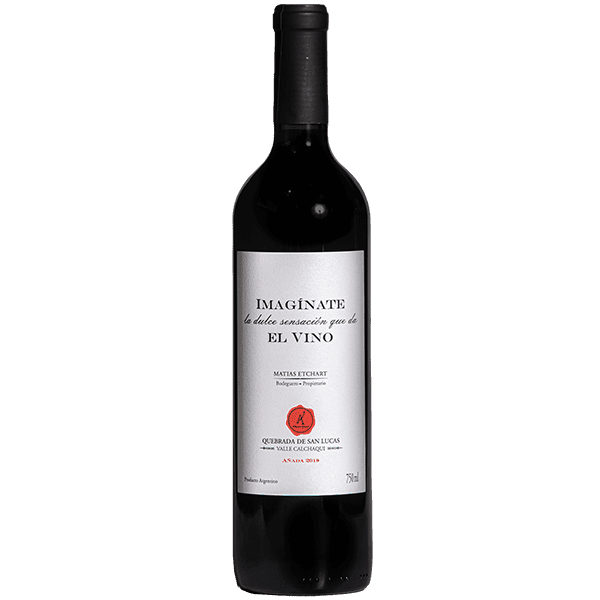