In this week’s special Halloween video, resident expert Julien Miquel takes a break from our regularly scheduled content to show us some of the spookiest wines on the market, for your perfect, grown-up Halloween treat…

The two previous weeks took us along the Ebro River in Northern Spain from Navarra down to Haro in Rioja.

This week, we head south and west, to the banks of the Duero or “Golden River.”

As it snakes out from central Spain towards the Atlantic Ocean, the river passes through the high, hot plains of Castilla y León, where it brings lifesaving water to the sandy soils of the wine region known as Ribera del Duero (literally “the banks of the Duero”). 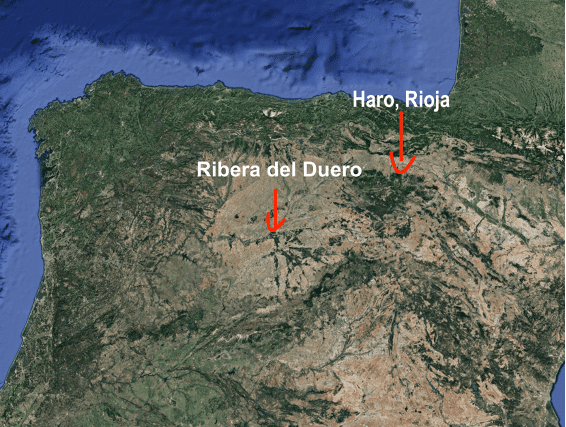 Open a wine book written before the 1980s, and you won’t find any mention of Ribera. Spanish wine aficionados might find that strange – isn’t Ribera, after all, the region behind Spain’s most celebrated wines including Unico, the preferred wine of Spain’s royal family?

Winemaking in the region dates back to the 12th century and the arrival of Benedictine monks from France’s Burgundy during the repoblación – a push to repopulate the area after a long period of warfare.

However, it wasn’t until the 1980s that word began to get out about the towering reds made from tinto fino and tinta del pais grapes (local names for tempranillo) on these flat, rocky plains.

It began with Alejandro Fernandez. In the 1970s, he set up shop in an old 16th century building in the village of Pesquera. When asked about his winemaking method, he responded, simply, “my ancestors made wines like these...I just make them better.”

Next came Mariano Garcia, AKA the “Master of Ribera.”

Working at the winery Vega Sicilia, Garcia created a sort of “Latour of Spain.” Vega’s flagship wine, Unico, is made only from the best harvests. If the quality falls short one year (or five), they simply don’t make it all. It is a favorite of collectors – we recently saw a case of just three bottles going for $1,700.

Unico is, indeed, “unique” in that it may have the longest aging process in the world (longer, even, than Brunellos and most Barolos). The wine must sit ten years before release.

That may sound crazy, until you taste wine from Ribera del Duero. It’s the kind of wine you only get at the extremes of viticulture – boiling days, freezing nights, a barren, sandy soil, low rainfall. We’ve included a bottle from Garcia in our Spanish Collection – if you open it this year, have a hearty meal ready. Otherwise, you’ll get your face torn off. (Timid readers would do well to give it a few years... or a few decades...)

You’ll notice that the bottle isn’t from the Ribera del Duero DO. That brings us to a little tip about Ribera – some of its best wines are not from its DO, but from the broader Castilla y León IGP. The IGP allows for more experimentation – particularly in soils. In the wine from our upcoming Spanish Collection, you’ll see that the grapes come from both Ribera and the smaller Toro region next door (home to Michel Rolland’s Campo Eliseo). If Ribera is a tough environment for plants, Toro is even worse. The resulting wines are loud, aggressive (Toro translates to bull after all), but highly prized.

Blending Toro with Ribera gives a real sense of the Castilian plains, unmuzzled by the arbitrary strictures of DO classifications. To give the soil an even greater voice, Garcia and his partners, the Masaveu family (winemakers since the 1800s) insist on organic, dry farmed grapes. The result is a 90 point wine with gushing red fruit that gets its head lobbed off by a swift cut of balsamic vinegar. Wait to taste it if you can.

P.S. Skip the tricks and treat yourself to some delicious wines this Halloween. Don't miss your chance to save up to 20% with shipping included. Click here to to get started...