Attenti: Our new Italian Collection will start shipping next week!

This week, in anticipation of our forthcoming Italian Collection (estimated ship date: July 19th), we continue our trip up the Italian Peninsula, from our third Tuscan wine (a Partnership exclusive) to our duo from Piedmont – a true “rose dipped in tar” Barolo, along with a “backdoor Barolo” from an 80-year-old winemaker who still makes all his wines with his own hands.

On our journey, we’ll also clear up a common point of confusion about Italian wine: the classification system.

More on that in a moment. But first... would you describe wine as “milky”?

This week, resident expert Julien covers a crucial aspect of judging wine: its ‘body’… the compound that makes a Napa cab feel so much bigger than a thin pinot… why body isn’t the same as texture… a surprisingly helpful milk analogy... and more…

In Italy, there are three main classifications. In descending order of cachet, they are DOCG, DOC, and IGT.

The final Tuscan wine in our collection, a 2018 Maghero Toscana Rosso, is technically an IGT (indicazione geografica tipica). “Toscana Rosso” literally means “a red from Tuscany.” It’s a classification one uses when either just outside the legal bounds of a DOC or DOCG area, or when using an un-sanctioned grape type, growing method, or winemaking method.

Because they don’t benefit from a famous name on the label (Barolo, Brunello, Chianti, etc.), IGT wines tend to be less expensive. They have an advantage over the DOCs, however, in that they allow for more experimentation. Cult “super Tuscans” (made with non-sanctioned French grapes rather than Italian varietals) like Sassicaia are among the most acclaimed (and most expensive) Italian wines. Yet they were once IGTs. (Due to their success, Sassicaia and the other Bolgheris were granted their own DOC in the 1980s).

Our Maghero 2018 – exclusive to the Partnership – is a great example of both the value and the quality you can find in an IGT. In tribute to their grandfather (nicknamed Maghero), winery owners Cesare and Gabriele Viviani have opted for a classic Chianti blend, using the canaiolo grape to soften the dominant sangiovese (an innovation introduced by Baron Ricasoli, said to have invented the recipe for modern Chianti, in the 19th century).

The addition of cabernet sauvignon brings some excitement. While cab sauv often overwhelms the more delicate sangiovese, here the two rivals form a remarkable union. It may not carry the Chianti imprimatur, but we’d go up against any Chianti with this Maghero 2018.

DOC (denominazione di origine controllata) is the standard classification and covers 330 Italian wine styles. Note that we’re talking about “styles” here. In addition to the geographical location of the vineyard and winery, the wine must be made according to a specific set of rules.

Our second-to-last wine, a Sorelle de Nicola Feyles Langhe Nebbiolo 2013, falls under the Langhe DOC. Langhe, like Barolo and Barbaresco, is within Italy’s northern Piedmont region. Yet, unlike Barolo and Barbaresco, Langhe is a broad classification. 80-year-old winemaker Antonio de Nicola makes Barolo, then holds back some of his nebbiolo grapes to make the Sorelle de Nicola 2013, under the Langhe DOC (a “declassified” wine).

As we’ve remarked before, such “declassified” wines can be great backdoors into more expensive classifications. This 2013, which spent 24 months in Barolo-grade Slovenian oak, followed by a 5-year rest in bottle, emerged with a Barolo-like orange tint, rich tannins, and a burst of cherry on the palate. In other words, it certainly could have fooled us.

The rules become more stringent with a DOCG, which adds a “garantita” to “denominazione di origine controllata.” Not only must the winemaking follow certain rules, but the resulting wine undergoes evaluation by a government committee – including both a chemical analysis and a tasting.

Initially, only Brunello, Vino Nobile, Barolo, and Babaresco had a DOCG designation. Today, that list has expanded to 74 wines, including Chianti and Chianti Classico (separate DOCGs).

Our last wine is a DOCG Barolo. The real deal (with the point scores to prove it).

As we’ve written before, not all Barolos are real Barolos of the old style (the “rose dipped in tar”). We were lucky to find Schiavenza Barolo Serralunga 2016, an old-style Barolo from the town of Serralunga, a star among the subzones of Piedmont’s Alba.

Winemakers Luciano and Walter describe themselves as traditional “to the bone.” They aren’t lying – using native yeast, organic/biodynamic farming, and Slovenian “botti” (as opposed to French oak barriques, which tend to dominate flavor). You’ll taste the tar alright – plus black cherry, leather, rust, and forest floor. 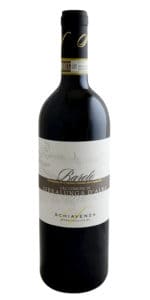 P.S. We will start shipping the Italian collection on Monday. If you are not slated to receive it or aren’t sure if you will, feel free to reach out to us at contact@bonnerprivatewines.com.