An Iron Fist in a Velvet Glove

We were celebrating a once-in-a-lifetime occasion.

It was time to splurge.

Besides which, we had already run through our last shipment from the Partnership.

Stepping into our local wine shop, we passed such familiar haunts as Saint-Joseph... the Bourgogne... the Barolo... (we never buy Argentine malbec from stores) on our way to a section in the back, where the wines are not stacked on shelves, but carefully laid out in drawers – the “fine” wines.

Opening the bottle, we found what most critics would deem a great wine… But why?

More on that in a moment. But first, are “older” vines really better? This week, former winemaker Julien Miquel shows just how much vines change as they age… including the trap first-time winemakers often fall for… the potential payoff of waiting for the vines to grow old… and why many wineries replant before that payoff comes…

An Iron Fist in a Velvet Glove (continued)

If “Boyd” doesn’t sound like a French name, it’s actually Scottish by way of Northern Ireland.

In the 1600s, the English created a plantation in the north of Ireland (Ulster, as it was known then) and settled it with Scots (the origin of “Scots-Irish” heritage).

The Boyds settled in Belfast, eventually building a large fortune as merchants there.

In 1754, they acquired a vineyard in the French village of Cantenac, to the north of Bordeaux, establishing the Château Boyd-Cantenac brand (now owned by the Guillemet family).

At that point in history, the bourgeois of Bordeaux had only just drained (with the help of Dutch engineers) the swamplands around the river Garonne to the north of the city, known as the Médoc. The newly drained flatlands, though unsuitable for most agriculture on account of their gravelly soil, welcomed large tracts of cabernet sauvignon and merlot, clustered around four main villages: Saint-Julien, Pauillac, Saint-Estèphe, and Margaux.

The last of these, Margaux, is the southernmost of the four and the furthest away from the Atlantic Ocean’s influence. It also has the distinction of having the worst soil in the Médoc. Vines there must dig down 22 feet to find moisture. The result is a delicate red wine often described as an “iron fist in a velvet glove.”

Margaux includes the village of Cantenac. The Château Boyd-Cantenac is a Margaux appellation wine, one of the better-value Margaux (as opposed to, say, the wines of Château Margaux, of which a case of six sells for $5,000).

Opening the 2014 released a rich, deep nose – curtain after curtain of aroma. Pushing deeper into the wine’s fabric, we felt for a moment as if it could go on forever. 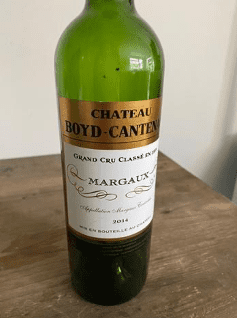 Sadly, once on the palate, the wine hit with a dull thud and the illusion was broken. Yes, the velvet was there, but the mouthfeel was so overpowering, it felt more like munching on a velvet sofa than a delicate glove.

We searched for flavor.

The mark of a great wine in the eyes of many critics, particularly those enamored with the products of Bordeaux and California, is balance. Think: the perfect harmonies of Bach as opposed to the muddy twang of a Mississippi bluesman.

The iron fist had long rusted and collapsed to dust.

What does it serve Boyd-Cantenac to exist as yet another among the ranks of balanced Bordeaux? Margaux, Lafite, and Latour – the great châteaux and their premier crus – will overshadow, outspend, and ultimately outsell them.

On the other hand, what option do they have? Because of the appellation on their label, drinkers will expect a certain type of wine when opening a bottle. To fail to provide that would mean ceding their place in the market to one of the many other eager but lesser châteaux in the region.