Long Island’s North Fork doesn’t look much like wine country. Yet, taste a 2014 pinot noir from there, or a 2012 merlot, and you’ll agree that vines have every right to grow in this little-known corner of the wine world.

More on that in a moment… But first, is organic wine a scam? This week, resident expert Julien Miquel discusses pesticides… the surprising reason many vineyards don’t need them… why European pesticide use quickly spiraled out of control

Coming out of Brooklyn and Queens, Long Island swings north and east into the Atlantic, gradually shedding suburbs for farms and fishing villages as it progresses north. At its tip, the island splits in two – the North Fork and the South Fork, the latter famous for its strip of chic little seaside villages known as The Hamptons.

In 1973, Alex and Louisa Hargrave chose a potato field in the North Fork as the locale for the first vineyard on Long Island. Since then, more than 90 more have sprung up.

The Instagram set favor rosé, rosé, and more rosé. One such vineyard – Croteaux – serves nothing but rosé to its clientele of millennials, who eschew tasting notes for selfies in front of the vineyard’s vintage Citroën truck, or the hand-hewn rafters of its old barn, or a big sign that proclaims, lest anyone forget, “Rosé!”

The rosé itself is perfectly serviceable, if forgettable, as were most other rosés we had in the area. The one exception being a deep, brooding pinot noir rosé from the vineyard of McCall (a name we will return to in a moment).

The whites we sampled felt similarly toothless, more the product of current fashion than a deep love of the craft – mostly bland sauvignon blancs that flowed as easily as hard seltzer or Gatorade sloshed with cheap vodka. On a hot, summer’s day drinking binge with the gals (“rosé all day!”), complexity would only get in the way.

The epicenter of “rosé all day,” with the Instagram account to prove it, is located on Long Island’s South Fork, near the Hamptons, at the winery of Wölffer. We had occasion to chat with a former manager from there. When asked why she had left to join a 100% handmade, small-batch winery on the North Fork, she replied, carefully, “Well, I’m more of a wine person.”

And that just about says it all.

For a “wine person,” the South Fork has little to offer anyway. The land is too expensive for experimentation, the clientele is uninterested in anything besides the most quaffable of wines, and the Atlantic Ocean’s influence is overwhelming.

The best wineries in Long Island remain not too far from where the Hargraves began their first plantings on the North Fork in 1973. There, the South Fork and outlying islands act as a buffer against the Atlantic, while the Long Island Sound and Peconic Bay moderate the cold, northeastern climate (New England is just across the Sound to the north). 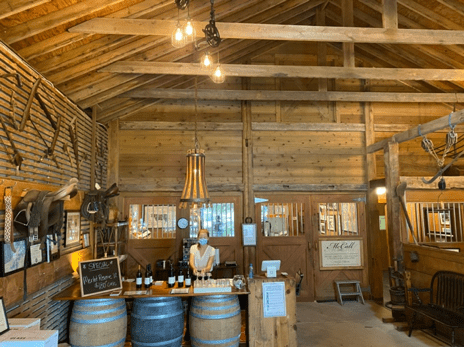 A winery on the North Fork

When we visited the aforementioned vineyard of McCall, it had rained all the previous day. Yet the sandy soil was largely dry. “The water slips right through,” explained one of the managers. Like the best on the North Fork, McCall takes its cues from France and Oregon, producing cool-weather pinot noir, Bordeaux single varietals and blends, and, of course, the obligatory rosé.

When we had the 2010 pinot noir back in 2015, we were immediately taken by the earthy, raw, dirt nose. If you tasted the Ruby Vineyard’s pinot in our recent American Collection, you may have noted a touch of “dust” in it. That effect was taken to wonderful extremes in the 2010 McCall (sadly, no longer available, as all of McCall’s wines are small batch, though the ‘reserve’ can still be obtained for $110 a bottle).

The secret is the climate. Hotter locales, like most of California (and even parts of Oregon), turn out big, fruity pinots. In cooler areas (more similar to Burgundy), the soil takes precedence.
McCall has a further advantage due to the North Fork’s dry fall season. Vintners here need not cower in fear of an early rain or hail, as they do in Burgundy. Nor do they need to resort to picking early (filling the gaps with extra sugar to counter the acidity of green grapes). They are able to let their pinot grapes ripen slowly and steadily until mid to late October.

On our most recent visit to McCall, we tried their 2014 McCall pinot noir (90 pts, Robert Parker). Sticking our noses into the glass, we immediately recognized the earthy scent. On the palate, the grit gave way to a blast of sour cherry – not fruity exactly, but authentic and natural.

Every grape is handpicked at McCall. The whole place runs exclusively on wind power from a turbine that looks like it was cobbled together from an old crop duster. Authentic and natural is a guiding principle here. 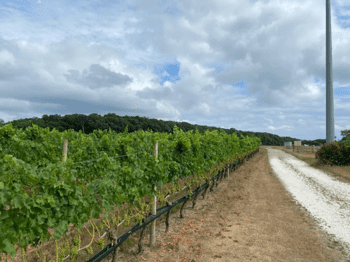 The pinot noir was every bit as excellent as we remembered. However, we were most impressed by a 2012 merlot reserve. It, too, had the tell-tale McCall nose. But on the palate, this vintage held a surprise: a rich, deep prune, almost reminiscent of port, that we have only ever found in two other wines – the 2013 Scopone Brunello from last year’s Italian Collection, and the 2012 Valle de Salta (Tacana’s first iteration).

One of the youngest wine regions in America, the North Fork is an old soul. As we sat outside next to the vines, the rusty wind turbine creaking away above us, we thought back to the year those merlot grapes had been picked, savoring the memories as we did the wine. 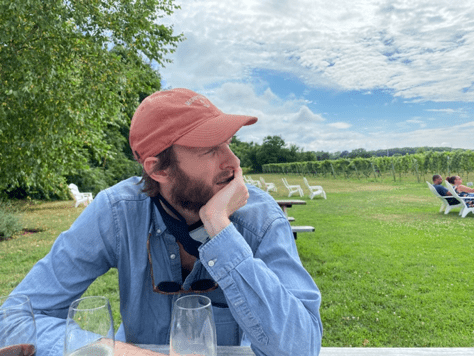 Your editor on the North Fork