(If you’re not scheduled to get the American collection, but would like to, you can always contact us at this link.)

As noted in your collection booklet (included in your shipment) several of these wines come from clones of old French vines. Clones (notably from vines in Burgundy) have played a big role in shaping American wine. For that reason, this week, we’re going to revisit our essay on clones from last year.

Before we start, if you haven’t seen Julien’s tasting video for the American collection, be sure to watch that here.

Sneaking onto a vineyard on a moonless night, an American named Gary is said to have crouched down by a pinot noir vine, clipped a few branches, wrapped them in a damp rag, and stuffed them into a Samsonite briefcase.

Pinot noir – more so than syrah or cabernet sauvignon – is genetically unstable and far more susceptible to genetic mutation than other vines. The result is that when pinot noir is allowed replicate naturally – with two vines each contributing genetic material to form a new baby vine – hundreds of varieties can emerge in a single area, making for unpredictable flavors and yields.

Today, nary a bottle of California pinot noir or chardonnay does NOT come from cloned vines. Some wineries have even begun to indicate the precise clone used – a Pommard, say, or a Dijon 115. 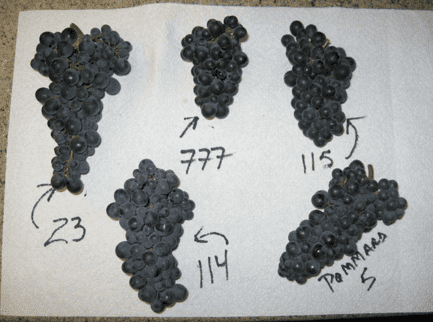 Of course, it wasn’t long before someone had the bright idea of making illicit clones of Burgundy’s most celebrated vines. So-called “heritage” clones – also known as “suitcase” or “Samsonite” clones, began to surface as a way to replicate Burgundy’s best vintages here in the US. Be on the lookout whenever you see any of those words on a wine bottle (“clone 828” has also been used)... you may just be about to taste a bit of history.

P.S. Reminder: if you’re not scheduled to receive the American collection, but would like to, then please contact us at this link.

P.P.S. And again, if you haven’t seen Julien’s tasting video for the American collection, you can watch it here.